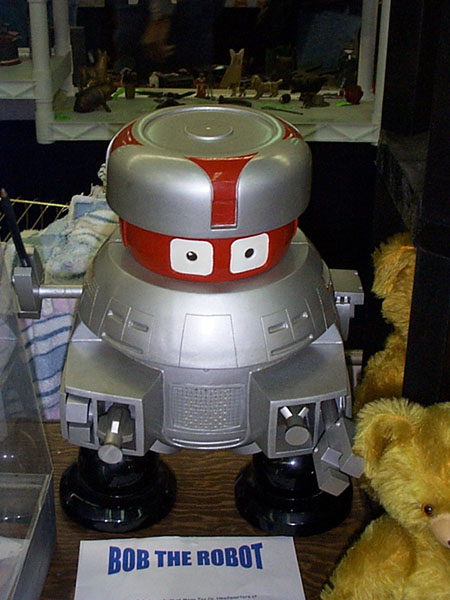 Side View of V.I.N. Cent

This piece is spectacular, and one of a kind! But we actually don't know if the story is true (which it probably is), unless someone has that Playboy issue the owner mentions of. The project to build this piece was named "BOB". I don't know if this was a joke of just calling it Bob, or there was a screw up in names because this is actually V.I.N. Cent, not Old B.O.B.. Though the owner didn't even know of V.I.N. Cent, and every time I said it was Vincent he snapped back saying Bob.

The toy itself seems to be held up but two heavy legs which have the wheels placed inside of them. I do believe most of the toy itself is hollow. The arms could extend, and the head could spin. I do not know, and nor did he, if the V.I.N. Cent prototype could spin his head or do any other things at least. The toy was extremely well painted and made me wish I won the lottery to buy it.

"Bob the Robot was built at Mego Toy Co. Headquarters at 41 Madison Ave. New York as a tie in toy for Disney's THE BLACK HOLE."

"Two handmade working Battery Operated Prototypes were made at a cost of $85,000.00 each. There was only one remote control built for both Robots. The prototypes were photographed for an issue of Playboy magizne in 1979-probably a pre Christmas issue. It was designed as an upscale toy with a retail price around $80.00 but was deemed to expensive so the project was scrapped. After that, one of the prototypes and the remote control were thrown in a dumpster and destroyed. This one was taken home by one of the people who worked on the BOB project."

Back To Black Hole

Back To Black Hole Series 3