The Dino Riders toys started hitting the market in 1988. The figures were going to coincide with the animated series on television. The toys were exceptionaly high in detail, and had tons of parts. The average Dino Rider toy came with over 15 parts! Lets not forget the the incredible box artwork, the flap & window packaging! The Dinosaurs were highly detailed, and colorful, as well as had stripes and other patterns which other "Dinosaur makers" at the time would leave out. They also had a added function of walking action or tail wagging action etc. The evil Rulon toys came with a self automated trap, which was different for each set. The largest dinosaurs recieved a motorized walking action. These were the T-Rex, Diplodocus and Triceratops.

This was the beggining of the toy line! Tyco introduced this line with 5 Dino Rider toys, 6 Rulon Toys and 8 figure 2-packs. This was a precise amount to give kids a variety, and also allow Tyco to have a good run of the 1st series, if it ever was going to be their last. The largest Dinosaurs of this series is the Brontosaurus and Tyranosaurus Rex, both with walking features. 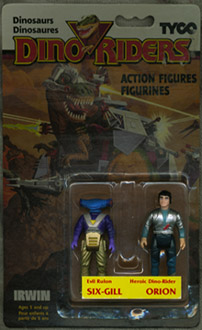 Back To Dino Rider Toys

Back To Dino Riders